Are you married but still swap the odd flirty text with your ex or leave in-jokes on their Facebook page? Do you sometimes even wonder what it would be like to get together with them again? You’re not alone. A recent study has highlighted what many people may quietly admit to — that even though they consider themselves in an exclusive, committed relationship, they are also in touch with an ex, just in case.

Researchers at the University of Oklahoma found that 62 per cent of adults who were in committed relationships admitted to keeping someone on the “back burner” ie someone who they might strike up a relationship with again — and for more than 50 per cent of these that was a former partner.

Who can’t help wondering how much Jennifer Lopez kept in touch with Ben Affleck for all those years after their break-up in 2004, before they announced their reunion in a very public superyacht smooch recently. Just as any time Brad Pitt and Jennifer Aniston are photographed together the internet goes into a frenzy of speculation. It seems there is something about the rekindling of old flames that keeps our imaginations fired, even if we are committed to someone else.

Of those in the Oklahoma study, 85 per cent were married and 93 per cent said that their relationship with their partner was exclusive. But let’s not forget the darker side of toying with this romantic fantasy. The researchers also found that communication with exes had a negative impact on relationships, with people in touch with exes having bad feelings about themselves despite doing so. 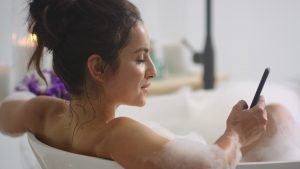 So what are the rules of staying in touch with past partners? Is this kind of friendship ever wholly innocent?

A good way to judge is to ask yourself how your partner would react if he or she saw texts between you. If you do realise there’s a spark between you, see this as a warning sign. It’s perhaps time for you to stop hankering after pastures old and focus on some home improvement. Ask yourself why you are investing so much energy in this person rather than in your present partner. Usually it’s because the relationship isn’t thriving.

If your partner is jealous of your ex friendship, don’t dismiss it
If your partner seeks reassurance, invalidating their feelings — “don’t be ridiculous!” — or refusing to engage will raise suspicions, and rightly so. It’s likely your partner is only requesting reassurance rather than an account of everything you discuss with your ex.

If rational people feel jealous there’s usually a reason. Ask yourself how you would feel if the situation were reversed. Even if you tell yourself you would be OK, it’s no excuse to dismiss their feelings. So if you relish communicating with an ex, maybe you’re holding resentment towards your partner and don’t even realise.

In my clinic I hear things like: “My partner is boring. I still send my ex flirty texts.” But there was a time when they weren’t, when you were interested in everything they said and did. What are you willing to do to get back to that? Imagine putting the energy you spend on secrecy, texting and dreaming into the relationship you have. It would be a good start.

Social media contact is usually fine — but keep it public
If your partner has a cling-on ex who gets in touch on Twitter and Facebook, be charitable. I had one patient whose husband’s old flame relentlessly popped up on social media. Even though she knew that this woman was zero threat, it needled.

In this case the old flame always pointedly ignored her, while trying to lay claim to her husband as a friend, so it was her behaviour rather than the fact she was a former lover that rankled. For the husband it was nothing, a harmless ego boost. He was oblivious — or more charitable — to her behaviour.

He was friendly without being encouraging. He didn’t reply to her private messages. His wife knew that even if this woman were to proposition him he would never act on it. If your relationship is secure, and an ex has pencilled in your partner as their back burner, be philosophical. They are the undignified one.

If your partner’s friendship with their ex troubles you, speak up
That said, if your partner’s friendship with their ex makes you feel insecure, admit it and say: “Let’s talk.” Ideally you could bring up the conversation and keep it light and jokey. Be brave and ask them: “Is there anything you miss from that relationship — how could we address it in this one?” This requires maturity, but it’s a practical question.

Of course it’s unlikely that one’s partner provides 100 per cent of everything we want. And nor should they. Some needs friends cover — conversations about the opera, for instance. But enjoying shared interests with friends and not being over-dependent on a partner is very different from filling an aching void in a marriage with an appealing ex. Just be sure of which applies to your partner — and you.

Remember, that relationship went wrong
In my clinic when most people talk about exes their only desire is to rant about how awful they were. Not many want to chat casually with an ex — if they do it’s usually to make themselves feel better and see if they still wield any power. (Could I get her or him back if I wanted to?) Do you want to be in a relationship with a person who needs to test what power they retain over a relationship that went wrong?

Emotional cheating can be as painful as physical cheating, whether or not it leads to an affair. If your partner continues a behaviour that they know distresses you, it hardly suggests that they care. Time to discuss your relationship and whether you want to stay in it.

How to handle your partner’s flirtatious ex
If you’re in a newish relationship and your partner is the best of friends with their ex, invite them for, say, a barbecue. It will either put your mind at rest or set alarm bells ringing. Often, though, these situations resemble an armed truce.

Not many people like to see themselves replaced by someone who has done better at the relationship than they have. I certainly don’t believe that people in relationships can’t have good friends of the opposite sex (or same, depending), nor that their partner has the right to decree who they can socialise with. But if there is a reasonable objection — and objecting to a flirtatious ex is reasonable — it should be taken seriously. It’s advisable to cut ties, or limit contact to occasional social situations only.

If your partner doesn’t know about the friendship, tell them
If you are really confident that a connection with your ex is innocent and that it hasn’t crossed your mind to rekindle at some point, telling your partner about it should be easy. And in many cases that is what happens. If you are keeping the friendship a secret, however, you should ask yourself why.

The reason for subterfuge I often hear in my clinic is that “my partner can be unreasonable”. Speaking from experience, I can tell you that the vast majority of people would not be OK with their partner having frequent contact with their ex.

So it strikes me that doing something you know your partner won’t be OK with isn’t the way forward. If this friendship is really so important — and genuinely innocent — that you would risk your partner’s discomfort to maintain it, at least have the decency to say: “I know you won’t be happy with this but can we agree to disagree on this one?”

Some people even share their fantasies with their partner — although possibly not their fantasies about an ex. Idris Elba or Jennifer Lopez we can understand, but the person you dated before you got married is far more threatening.

A wise question to ask is why you’re doing it. Perhaps sex with your ex was good but the relationship was awful. Now you have a fantastic relationship but the sex is a little dull. If the sex isn’t fulfilling, consider what is it you crave — is it great sex, or sex with great intimacy?

For many, the vulnerability we need to show to let the other person know our sexual needs is very uncomfortable. But try to explore and help each other — and know that probably both of you find it difficult. It might be a revival of your sex life. There’s a lot of hope if we’re willing to be vulnerable.

Be warned, cheating is easier to slip into if it’s with an ex
So you see your ex for a drink now and then — and you feel on safe ground because you’ve been there, done that. It’s nostalgia, the easy familiarity, nothing more, and it seems pointless to let a friendship go. Yet it’s precisely this that makes it so easy to cross a boundary with an ex — we assume we’re immune to their charms (or lack of them) and we know what we’re dealing with, and then suddenly we’ve fallen for them.

The flip side is, they also know what they’re dealing with, and if their intentions or motives are nefarious, they know your vulnerabilities. Ask yourself why you’re doing this. Is it insecurity or a reaction to not feeling good enough? Are you upset with your partner? Why play with fire — and is that the attraction?

Also, why is your ex doing this? Don’t forget that it’s easier to be delightful in small bursts. When you were together you lived with their character and behavioural flaws — now you have the luxury of editing yourselves and you have no emotional responsibility to each other.

What you do have, though, is an emotional responsibility to your person at home. How would you feel if they had someone on the back burner? If you would care, I suggest you switch off the heat.